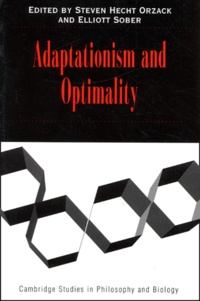 The debate over the relative importance of natural selection as compared to other forces affecting the evolution of organisms is a long-standing and central controversy in evolutionary biology. Adaptionism is the view that natural selection is so important and nonselective forces so unimportant, that accurate explanations and predictions of the phenotypes of organisms can be obtained by simplified models in which selection Is represented and nonselective forces are ignored. Adaptationists and their critics disagree about this proposition concerning tire history of life, and they also disagree about the methodologies that are needed to address this biological question. Many questions remain unresolved, and the terms of the debate are still sometimes unclear. Adaptationism and optimality presents an up-to-date view of this controversy and reflects the dramatic changes in our understanding of evolution that have occurred in the past 20 years. The volume combines contributions from biologists and philosophers and offers a systematic treatment of foundational, conceptual and methodological issues. The essays examine recent developments in topics such as phylogenetic an analysis, the theory of optimality and ESS models, and the methodology of hypothesis testing in evolutionary biology. The contributors disagreement on fundamental aspects of this subject represents the diversity of opinion that makes this controversy so highly charged. These essays are intended to provide useful advice to biologists in the trenches but also to assess the larger theoretical and conceptual issues that formthe basis of the current controversy.